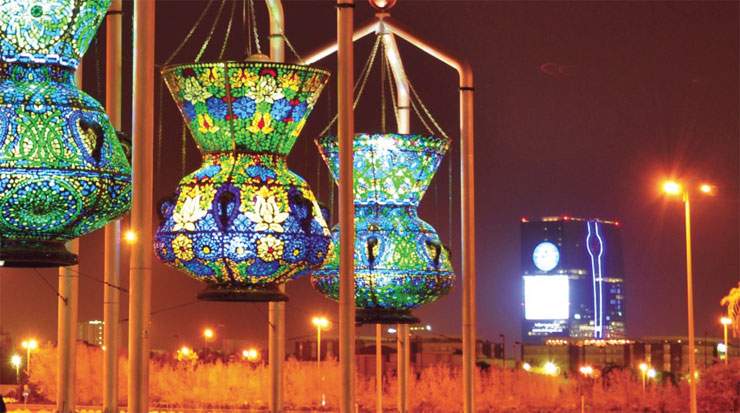 NESTLED ON THE COAST OF THE RED SEA, JEDDAH IS A MAJOR COMMERCIAL HUB AND THE GATEWAY TO SOME OF THE MOST IMPORTANT RELIGIOUS SITES IN THE ISLAMIC WORLD.

WHILE SAUDI ARABIA AIMS TO INCREASE THE ANNUAL NUMBER OF PILGRIMS TO 30 MILLION, IN LINE WITH SAUDI VISION 2030, JEDDAH IS READY TO PROVE ITSELF AS MORE THAN JUST A STOPOVER.

As Saudi Arabia continues to implement measures to further diversify its economy, Jeddah is also welcoming changes to enhance its tourism offering. Renowned as a major entry port for pilgrims as they travel to Mecca, inarguably religious tourism is exceptionally valuable to the city’s tourism industry.

“Religious tourism is possibly the most vital component in the hospitality industry within Jeddah, as it is the gateway to Mecca and Medina,” enthused Cherine Hamdan, marketing and communication manager, Assila Hotel. She elaborated that while a small portion of guests throughout the year have the intention of conducting some form of religious tourism, this rises to between 80 – 90 percent during the seasons of Ramadan and Hajj.

In fact, according to Abdullah Bakrman, corporate marketing manager, Makarem, Dur Hospitality Group, more than 70 percent of guests visiting Jeddah are doing so for religious purposes. Further underscoring the significance of what is usually a niche segment, he noted, “Religious tourism remains the lion’s share of tourism in the Kingdom, it contributes alone three percent of the country’s GDP.”

The relationship between Mecca and the second largest city could be described as symbiotic.

Yet on the other hand, as a result of a serious decline in business in Mecca in the first quarter (Q1) of this year, visible by a 22 percent year-on-year drop in RevPAR, as revealed by Mostafa Elenany, regional director, hotel sales, GCC and Levant countries, Middle East, AccorHotels, the coastal city also suffered.

He expounded that in Q1, Jeddah saw a 19 percent drop in volume alongside a 15 percent decline in average daily rate, which ultimately led to a massive 31 percent plummet in RevPAR, thus paving the way for alternative streams of tourism that are less impacted by seasonality.

As revealed in Jones Lang LaSalle’s Q1 2017 Jeddah Real Estate Market Overview report, hotel stock in Jeddah had reached 9,900 keys, while an additional 1,051 units are expected to enter the market this year alone.

With more competition than ever before, hoteliers are taking extra steps to differentiate their services, especially when it comes to religious travellers.

In a bid to enrich experiences for such visitors, Bakrman revealed that Makaram hotels offer a spiritual concierge to provide guidance, as well as libraries with religious texts and artifacts.

Moreover, the group’s mobile application features a full Hajj and Umrah guide, prayer times as well as Qibla locator, demonstrating a clear understanding of its guests’ needs, especially important as the Saudi government has set its sights on growing the number of pilgrims to 30 million annually by 2030.

While noting that a wide range of nationalities tend to visit the city to conduct religious duties, Hamdan highlighted that the hotel’s priority is to ensure the requirements of multicultural guests are met, as well as offering transportation to the holy sites and assisting with these trip, through the provision of Ihram clothing, among other services.

Concurring that source markets tend to be diverse, with Indonesia, Egypt and Turkey leading the way, Elenany added that despite their cultural differences, the main concern for visitors is location and accessibility to religious sites.

MORE THAN MEETS THE EYE

While religious tourism is undoubtedly a lucrative sector for hoteliers in Jeddah, the cosmopolitan city has much more to offer as it attempts to overcome seasonality and become a more sustainable year-round destination.

In line with this, a number of infrastructure projects are progressing, including the new airport project and high-speed rail, disclosed Elenany, which, he explained are expected to maximise sources of business and improve commercial activity throughout the year.

Bakrman praised the efforts of Saudi Commission for Tourism & National Heritage (SCTH) in this regard, as it has heavily invested in improving not just infrastructure to attract business and domestic travel, but has committed to archaeological sites, participated in international hospitality events as well as launched initiatives to drive a surge in internal tourism. So far, SCTH’s efforts seem to be paying off.

Bakrman noted that in 2016 leisure spending increased to account for a 2.8 percent share of the economy, while a 40 percent rise in the number of domestic trips between 2015 and 2020 has been forecasted.

As the country’s commercial capital, Jeddah also has the potential to be a top MICE destination. Elenany pinpointed that the destination is particularly focussed on boosting its MICE infrastructure, with enhancements well underway.

As well as highlighting the government’s initiatives to further diversify the industry, he continued to say that Jeddah is expected to benefit from SCTH’s strategic approach of capitalising on domestic tourism flows while internally promoting the destination as a hub of local tourism.

Concluding that Jeddah has the ability to appeal to an assortment of segments, including leisure thanks to the recent influx of entertainment events, along with cultural, corporate, health and heritage tourism, Bakrman said, “The coastal city’s seaside resort appeal and business market puts it on top of the list of Saudi Arabian tourism.”