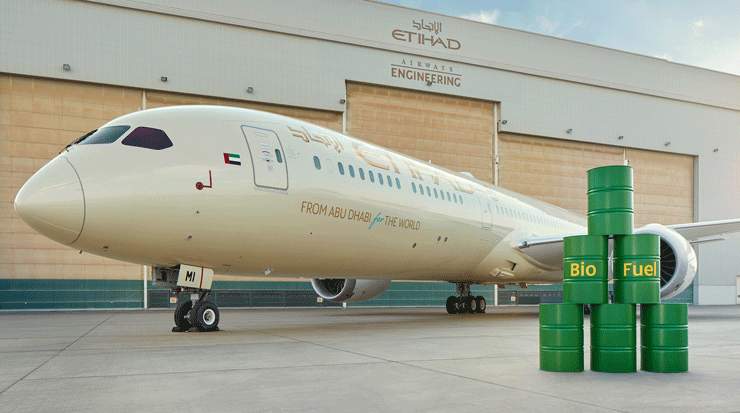 Following the launch of the Etihad Greenliner Programme at the 2019 Dubai Airshow, and the arrival of the flagship Greenliner in January 2020, Etihad Airways recently officially inaugurated the latest aircraft in its journey towards sustainability, with the pioneering 2020 ecoDemonstrator entering commercial service following a series of industry-leading test flights across the US.

The aircraft, a brand-new Boeing 787-10 registered A6-BMI, is the latest arrival to Etihad’s 39-strong fleet of 787 Dreamliners, making the UAE national airline one of the world’s largest operators of the technologically advanced aircraft type.

As the 2020 ecoDemonstrator, in partnership with Boeing, NASA and Safran Landing Systems, Etihad’s 787 Dreamliner was used as a flying testbed to accelerate technological developments with the goal of making commercial aviation safer and more sustainable. A familiar sight in the skies over the American Northwest in recent months, the uniquely branded Dreamliner, kitted out with complex testing equipment, conducted extensive research flying above Montana and between Washington state and South Carolina.

Tony Douglas, group CEO, Etihad Aviation Group, said, “As the first 787-10 to take part in the ecoDemonstrator programme, this very special aircraft stands testament to the innovation and drive for sustainable aviation that forms a core element of Etihad’s values and long-term vision. This is in line with the tremendous strides being made by Abu Dhabi, and the UAE, in the research and development of viable solutions to combat climate change.

To celebrate its launch into regular service, the special aircraft has been fitted with a commemorative plaque highlighting its contribution to sustainability, while its fuselage still retains some of the original ecoDemonstrator flight-test branding, including the ecoDemonstrator and Boeing logos, in addition to the words ‘From Abu Dhabi for the World’, a reimagined version of the airline’s famous tagline.