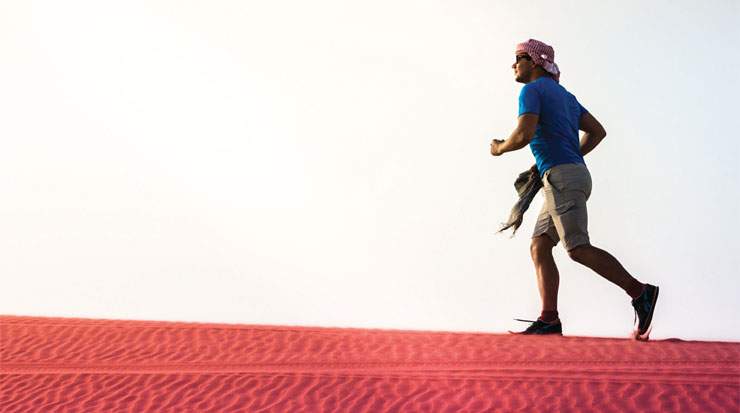 ABU DHABI IS A DESTINATION THAT IS INCREASINGLY POSITIONING ITSELF AS A LEADING GLOBAL SPORTS VENUE, HOSTING MORE AND MORE HIGH-PROFILE INTERNATIONAL SPORTING EVENTS EACH YEAR.

WITH THE UAE CAPITAL’S FIRST-CLASS FACILITIES AND WORLD-CLASS TOURISM OFFERING, SPORTS TOURISTS HAVE MUCH TO LOOK FORWARD TO.

In its 2016 report on Abu Dhabi, which focussed on sports tourism, global business intelligence provider, Oxford Business Group (OBG), noted that although the emirate was almost an unknown international sporting destination a decade earlier, it had since built up a strong presence through hosting high profile sports events.

OBG also reported that Abu Dhabi’s government had, at the same time, supported the expansion of domestic sports, transforming the emirate into a regional sporting centre.

Steps taken by the government included the creation of Abu Dhabi Sports Council (ADSC), which was established in 2006 by H.H. Sheikh Mohamed Bin Zayed Al Nahyan, crown prince, Abu Dhabi. According to ADSC, the council is aligned to the emirate’s leadership vision to develop sport and youth activities. Its vision is listed as making Abu Dhabi an international capital for sport practicing, competitiveness and international events.

The Council hosts and supports the staging of international world-class sporting events, while also promoting an emirate-wide sports calendar aiming to stimulate local residents’ desire to participate, and help talented individuals to reach their sporting potential.

ADSC believes that sporting events deliver a host of benefits for the emirate and its residents. These span improved health and wellness, the building of community spirit, the discovering of local talent and the delivery of international exposure of the emirate as a world-class sporting events hub. Whether it is land, sea or air, we have sport covered, writes ADSC’s official website.

These events may have also contributed to increasing the emirate’s general popularity as an overall tourism destination.

OBG noted that the relationship between major sporting events and increased tourism is well documented. It suggested that high-profile gatherings benefit Abu Dhabi’s tourism profile by positioning the emirate as capable of hosting large scale events, in turn building up its conference industry credentials. Globally-popular events also, according to OBG, draw attention to Abu Dhabi’s winter climate and sporting facilities to increase the emirate’s appeal as a winter training hub, another important facet of sports tourism.

This view has been backed up by Abu Dhabi’s positive tourism performance. In 2017, a record 4.87 million hotel guests visited the emirate representing an almost 10 percent rise on the previous year, according to Abu Dhabi’s Department Of Culture And Tourism (DCT Abu Dhabi). In January this year, DCT Abu Dhabi also announced a recorded 7.4 percent increase in the number of hotel guests compared to the same month in 2017.

Commenting on how sporting events have impacted his properties, Nicolas, remarked, “The fourth quarter in 2017 was a tremendously busy period and being on-site exhibition hotels near Abu Dhabi National Exhibition Centre, we were right in the middle of all the action.

“Several global events that took place in the last quarter had a major impact on the overall business of 2017,” continued Nicolas. “The feeder market for sports is quite diverse and has a global draw of visitors. Fans from around the world visit Abu Dhabi to attend the major sporting events that are held here. Specifically, the 2017 FIFA Club World Cup had more than 80,000 fans visit the event with our guests coming from Europe, Latin America and Asia.”