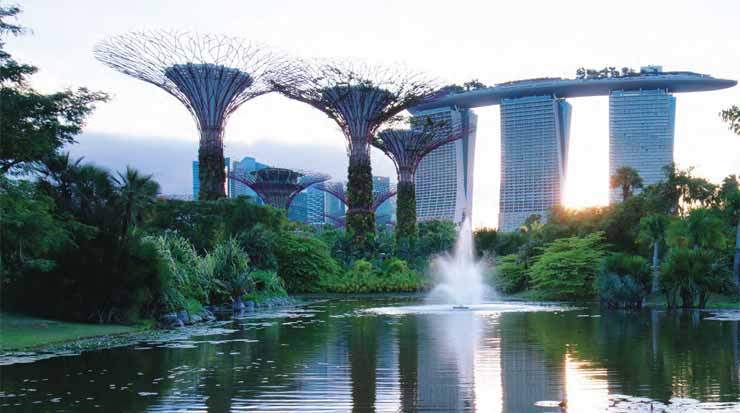 FOR THE SECOND YEAR RUNNING, SINGAPORE HAS BEEN RANKED AS THE NUMBER ONE NON-ORGANISATION OF ISLAMIC COOPERATION DESTINATIONS IN THE WORLD IN THE MASTERCARD-CRESCENTRATING GLOBAL

MUSLIM TRAVEL INDEX. CONSIDERING THAT BY 2020, THE NUMBER OF MUSLIM TRAVELLERS IS EXPECTED TO REACH 168 MILLION, THE CITY STATE’S TOURISM INDUSTRY HAS A PROMISING POTENTIAL.

In the first half of the year, Singapore Changi Airport welcomed rising numbers of Middle Eastern passengers with a year-on-year increase of 6.2 percent, as reported by Ivan Tan, senior vice president, corporate and marketing communications, Changi Airport Group.

While describing a slight surge in guest volumes from the Middle East, Jennifer Yong, director of sales and marketing, Shangi-La’s Rasa Sentosa Resort & Spa, emphasised this source market’s expanding length of stay, which can now reach up to two weeks.

With hotels recording varying statistics, it becomes clear that a convenient location is of prime concern to Middle Eastern holiday-makers.

The city state boasts a myriad of world-class retail and entertainment experiences, making it an attractive destination for those who enjoy shopping, a popular past-time of many Middle Eastern visitors, as explained by Victor Chin, director of business and development, Mandarin Orchard Hotel.

A MELTING POT OF CULTURES

In addition to describing Arab Street and Geylang Serai as popular options for Middle Eastern travellers, Chin enthused, “The greatest attraction is the cultural diversity in Singapore.”

According to both Ee and Yong, varied beliefs, cuisines and languages co-exist harmoniously, creating a delightful and inclusive destination for Muslim visitors.

This is exemplified by the fact that around 15 percent of the local population is Muslim, explained Abdul Salam. He continued, “Finding places of worship in Singapore is also easy, with more than 70 mosques all over the island.”

It is no secret that services which enable and encourage religious observances are of high importance to Middle Eastern visitors, with Halal options being a necessity for many.

Fairmount Singapore, one of the destination’s only properties to achieve a five-star CrescentRating this year, is equipped with copies of the Quran, prayer mats and schedules as well as separate male and female prayer rooms and Qibla direction in all rooms, detailed Sok Hia Ng, executive assistant manager, sales and marketing, Fairmont Singapore and Swissôtel The Stamford.

Just like Fairmount Singapore, many other properties have also adapted similar strategies to meet the needs of Muslim visitors in order to appeal to what Lexi Shuttleworth, public relations and communications manager, Lightfoot Travel, described as one of the world’s fastest-growing sectors.