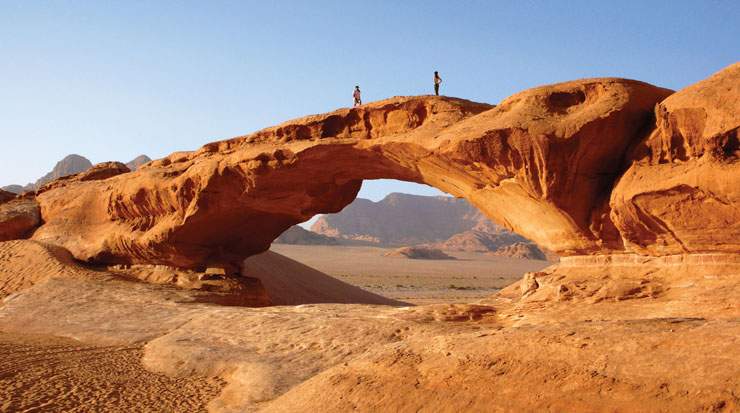 BEING A SAFE HAVEN IN A POLITICALLY FRAGILE REGION, JORDAN HAS DELIGHTED VISITORS FOR CENTURIES WITH ITS WORLD HERITAGE SITES, FRIENDLY TOWNS AND INSPIRING DESERT LANDSCAPES.

THE COUNTRY HAS ENJOYED DECADES OF PEACE AND STABILITY, ATTRACTING FAMILIES, CORPORATE TRAVELLERS, CULTURE AND ANDRENALINE SEEKERS TO EXPLORE ITS UNIQUE OFFERING.

Home to some of the world's finest natural and man-made wonders, Jordan has a well-developed tourism industry that remains one of the most significant private sector pillars of its economy.

The country has enjoyed decades of peace and political stability, despite the conflicts and tensions afflicting its neighbouring countries.

According to World Travel & Tourism Council, travel and tourism contributes 4.9 percent to the country's total GDP, while the sector is expected to support 118,000 jobs in 2027.

This year has been particularly successful for the sector, with the Ministry of Tourism and Antiquities reporting a 5.4 percent growth for the first quarter (Q1) compared to the corresponding period in 2016.

In particular, the authority revealed that visitors to Petra increased by 36 percent, Wadi Rum by 110 percent and Mount Nebo by 55 percent, during the reviewed months. Commenting on this year's success, Haytham Abdualdahab, country director, sales, Jordan, Mövenpick Hotels & Resorts, stated that the brand's properties saw an increase of 5.7 percent in total visitor arrivals, compared to 2016 and 10 percent increase in overnight tourist visits.

Abdualdahab added that on the basis of bookings, 2018 seems to be a very promising year for the business. Moreover, the country's main hub, Queen Alia International Airport welcomed 785,454 passengers in September, registering a 1.4 percent growth compared to the corresponding month in 2016, while an upward trajectory in aircraft movements was also registered for the month under review, with a two percent growth over September 2016, according to CAPA - Centre for Aviation.

These encouraging figures can be easily attributed to the fact that Jordan remains a safe and stable oasis in a sea of conflicts. Part of the merit, no doubt goes to those who work hard to promote the country as an enticing tourism destination.

In 2016, the International Monetary Fund (IMF) approved a three-year extended arrangement for the country for USD723 million with the purpose of advancing fiscal consolidation to lower public debt and broaden structural reforms to enhance the conditions for more inclusive growth.

As destinations in the Middle East continue to be affected by ongoing regional upheavals, the IMF's project has brought hope to Jordan, opening the doors for further growth in a period of political turmoil.

Meanwhile, Royal Jordanian has recently announced that it will implement new security measures which were required by the US authorities for US-bound flights beginning January 2018. Meeting the requirements of the US, the airlines will feature the latest advanced security measurements, for a safer, more efficient and reliable flight.

Along with facilitating an improved passenger experience, the airplanes additional security aims to further elevate the quality of services across the airline's expanding network.

Optimism for the country's future in the tourism segment has been given new flame, and industry experts, such as Abdualdahab have increased their efforts to promote their businesses and Jordan as a whole.

"We are working hand to hand with all tour operators in the country and worldwide to promote Jordan, attending major shows and expos in the world to meet existing and potential partners," emphasised, Abdualdahab, adding also that Mövenpick properties in the country, fully support the marketing efforts of the Ministry of Tourism and Antiquities and Aqaba Special Economic Zone Authority in promoting Jordan as a destination.