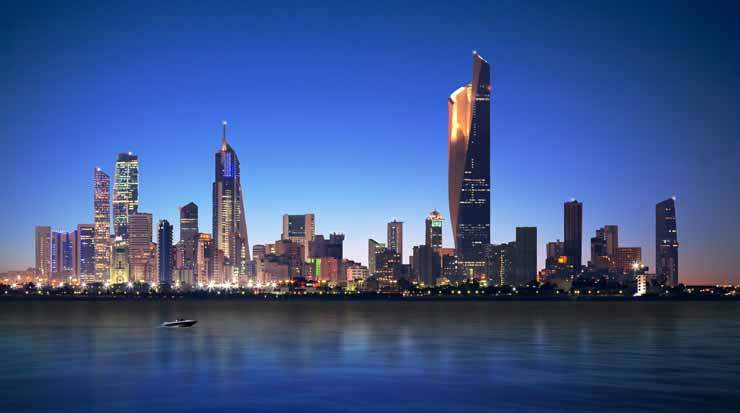 KUWAIT: A Gem In The Region

While the majority of properties provide facilities catering to the needs of all types of travellers, the country’s top attractions are a dynamic mix of breathtaking nature, authentic Arab culture, world-class shopping and an acclaimed dining scene.

Describing Kuwait as a gem in the region, Schuler accentuated the country’s untouched charm, particularly its islands, such as Failaka Island and Green Island, which are popular with visitors seeking relaxation.

In contrast, he continued to say that Kuwait Towers and Liberation Tower are also unique tourist landmarks.

Furthermore, Jardin highlighted that locals are especially proud of the rich and varied culinary options adding that the country’s top chefs attract attention from across the region.

He exemplified, “From artisanal markets, such as Qout Market, to the Taste of Kuwait festival, foodies will discover a passion for Kuwait’s food and beverage offerings.”

All going to plan, the potential of the ever-developing sector will accumulate in Kuwait becoming The Food Capital of the World in 2030.

Perhaps the answer to achieving the forecasted growth in leisure spending is Kuwait’s extensive shopping options, spanning traditional souks, to modern shopping malls complete with entertainment for all the family.

Recognising the potential of shopping tourism, Aoun disclosed, “Kuwait Marriott Hotels will be launching new shopping packages this year, in cooperation with stores in Array Mall and Salhia Mall.”

Building upon its heritage and connection to the arts, Jardin also noted that the recent opening of Sheikh Jaber Al Ahmad Cultural Centre has strengthened the already vibrant cultural scene, offering a state-of-the-art opera house and exhibition halls which will provide a platform for a plethora of events.

Nevertheless, Ammar Kriker, director, Safari Travel & Tourism, admitted that given its reputation as a business hub, it can be difficult to sell the country as a leisure getaway, when there is a paucity of knowledge of its offerings.

Speaking in agreement, Attia concurred, “Kuwait is lacking advertisement on the cultural and touristic sites [...].”

This is not to say that the trade has become stagnant, but quite the opposite.

Kriker has observed a fundamental reshape, most visible with the launch of many inbound travel agencies, who will undoubtedly boost interest.

Not only this, but Kriker depicted the opening of international hotels, ranging from ultra-luxury to budget, which he believes could strengthen the country’s international appeal.

PREPARING FOR TAKE OFF

Of Kuwait’s total tourism numbers, 84.7 percent of travel spend was from domestic travellers, as per WTTC, while international arrivals, contributed a mere 15.3 percent to the economy, denoting the breadth of opportunity given the right marketing strategy and development of world-class infrastructure.

This is especially true when considering that WTTC had expected that Kuwait would attract around 385,000 international visitors in 2016, an anticipated growth of 8.7 percent. By 2026, international
arrivals are envisaged to top 484,000.

Indeed, the key to unlocking Kuwait’s potential is the development of the country’s aviation industry which can propel the country as a top international destination and a new stopover option in the region.

Jardin expounded, “[...] The new airport in Kuwait planned for 2022 [...] will have the capacity to handle 25 million passengers per year, with 51 gates and stands suitable for all plane types.”

These elements, accompanied by Kuwait’s visa waiver for many countries, as recounted by Kriker, contribute to the ease of access into the country.

Kriker further exemplified the need to adapt in order to attract overseas visitors through developing relationships with international organisations to also promote Kuwait as well as establishing local leisure itineraries in several languages.

However, while lauding the government’s efforts in luring in foreign leisure tourists, Kriker, underscored that the region’s geopolitical situation is slowing down the growth of this lucrative market.

Nonetheless, travel professionals are confident in both the country’s offering and prospects.

Aoun concluded, “I think we will witness a steady growth in the tourism sector in the coming years, especially with the increasing number of leisure travellers from GCC countries [...].”

Commenting on the enthusiasm surrounding the upcoming inauguration of Four Seasons Hotel Kuwait at Burj Alshaya, due to open this year, Jardin explained, “[...] A good deal of our excitement stems from our passion to show our guests the appeal of this destination.

We believe Kuwait has much to offer business and leisure travellers.”

All in all, while Kuwait has a long way to go on the leisure front, this leaves plenty of room for future development which will be catapulted by the government’s injection of investment along with travel professionals’ passion for nurturing the country.