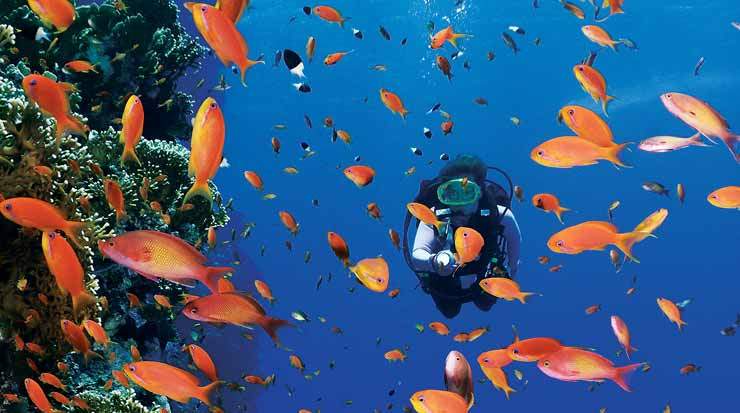 DESPITE UNPREDICTED SETBACKS IN CERTAIN AREAS, TOURISM STAKEHOLDERS IN THE RED SEA REGION REMAIN UNDETERRED IN THEIR PURSUIT OF PLACING THE DESTINATION FIRMLY BACK ON THE TOURIST

MAP AS A YEAR-ROUND HOTSPOT FOR TRAVELLERS FROM ALL WALKS OF LIFE.

According to Jens Freise, vice president, marketing and sales, Orascom Hotel Management, a subsidiary of Orascom Development Holding, the entire Egyptian tourism industry has been suffering the consequences of the Russian aircraft incident in October 2015, however, El Gouna – the company’s biggest project on the Red Sea – has limited the magnitude of this industry-wide stance thanks to a diversified market segmentation.

On the other hand, the entity’s other project in the region, Makadi, where Russian arrivals used to represent a large portion of the total hotel business, was severely affected with occupancy declining 37 percent quarter-over-quarter in the first three months of this year.

In the face of recent happenings, that have led to a major disruption of connectivity from traditional European feeder markets, industry operators in the area have had to shift their focus to other sources, according to Bornman.

“Given the volatility of the world we live in, being trained, prepared and able to adapt to changing situations is key to our success,” he further noted.

Accordingly, efforts at both Sheraton Soma Bay and Westin Soma Bay Golf Resort & Spa have been directed towards fostering the development of new sources, such as China, Africa, the Middle East and the Egyptian market.

As Haitham Nassar, general manager, Hilton Hurghada Resort, noted, business at the property has been moderate over the past few years, however, the establishment has been successful in maintaining its partnerships with most feeder markets, and has also witnessed strong support from local tourists during various holiday seasons.

“The Russian market has seen a major decline due to the travel ban, however, some Eastern European markets have shown great resilience and interest in coming and visiting the destination. We have also seen an increasing demand from Chinese and GCC markets,” Nassar elaborated.

“Offering something for everyone, popular resorts offer everything from water parks, shopping malls [as well as] vibrant bars and restaurants to desert adventures, quad biking, scuba diving, wind surfing and stargazing excursions – all available at a fraction of the price of many European resorts,“ Hilton continued.

Regardless of past and current circumstances, tourism stakeholders in the area remain positive for the future.

“Egypt’s Red Sea coast, thanks to the devotion of hotel owners and tourism investors [as well as] the continuous development and upgrades of the touristic projects, [in addition to] the highly trained staff and the high value-for-money, will continue to be one of Egypt’s touristic hotspots,” remarked Freise, deeming the current low demand for the country’s destinations, among them the Red Sea, only temporary, so much so that the company confidently launched Ancient Sands Resort on April 19, its 18th hotel in El Gouna.

However, he was quick to suggest the need for more media coverage, in a bid to raise public awareness and reflect the continuous efforts being exuded on the ground.

Stressing the importance of, first and foremost, focussing on resolving security concerns, Bornman added, “If we are able to build on the perception of Egypt – and particularly the Red Sea – as being a safe destination to travel to, [that will] boost the travel numbers into the destination.”

Nassar also highlighted the significance of a unified front by all tourism stakeholders in the area and the cooperation on long-term action plans in order to improve the destination and increase the scale of activities with a stronger online presence to attract the millennial segment.

“[...] The first step to recovery should be [taken by] tour operators by reactivating the cancelled flights or by reopening the sales normally to Egypt,” he suggested.