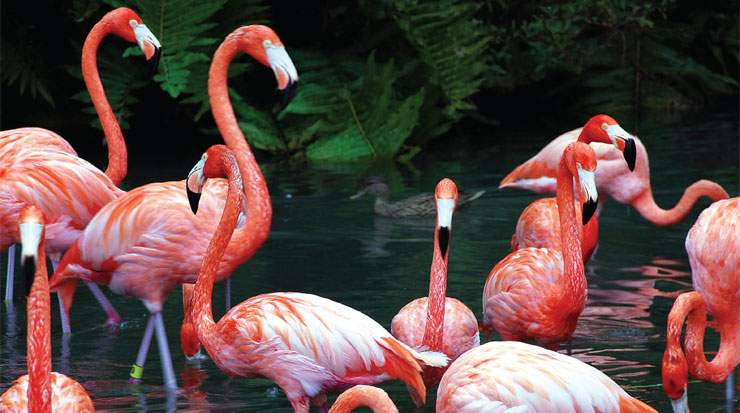 WITH A RICH DIVERSITY OF WILDLIFE AND NATURAL ATTRACTIONS, NATURE AND ADVENTURE LOVERS VISITING AJMAN ARE INCREASING EACH YEAR DUE TO TARGETED PROMOTIONAL CAMPAIGNS AND EXCITING NEW DEVELOPMENTS.

People visiting Ajman are, more often than not, arriving to experience the emirate’s unique nature, and combining this with trips to the bustling city centre. Located on the coast of the Persian Gulf, Ajman is often described within the travel industry as being a haven, away from the stress of everyday life back home.

Among the emirate’s top nature attractions is Al Zorah Nature Reserve. Occupying some 5,400 km of coastal land, the lagoons and mangrove forests at Al Zorah are home to an array of native marine and plant life. The reserve shelters over 102 species of resident and migratory birds, including Eurasian spoonbills and the famed pink flamingoes which can be spotted throughout the year, more so during the nesting season.

The area is a highly demanded destination for tourists, scientists and researchers that arrive to conduct field studies due to the rich variety of corals, fish, molluscs and indigenous flora.

With such an array of nature offerings and attractions for travellers to admire, the emirate is continuously focussing on enhancing its facilities that compliment these experiences, such as via adventure tourism services.

“There are a variety of different sectors of tourism offered like kayaking through lush mangroves, wildlife and natural reserves,” noted Kamal Rijhwani, executive assistant manager, Radisson Blu Hotel, Ajman. “Al Zorah is a beautiful location filled with natural reserves, a lush golf club and lakes, while Al Manama and Masfout are great places for adventurous road trips and activities.”

Additionally, Al Zorah is heightening its tourism appeal with the launch of Kayak Tours through its natural mangroves and lagoons. Kayak Tours is expected to further enhance the tourism scene and hopefully establish Al Zorah as a must-visit adventure tourism destination.

From modern adventure experiences to the more traditional ones, Ajman caters to both with ease, especially with camel racing and horse riding being deeply rooted into its culture. Portraying their traditions and tourism potential, Ajman is actively encouraging such activities, while simultaneously showcasing its wildlife offerings. Ajman is also renowned for keeping the historic dhow racing tradition alive by supplying dhow boats for events across the UAE.

Building on to such variations, Rijhwani, enthused, “A great underrated attraction launched in 2017 was the Ajman Pearl Journey, where visitors have the opportunity to embark on a traditional Arabian boat to learn about the history of pearling, how to open an oyster and, if lucky, even find a pearl to take home as a souvenir.”

Complimenting its natural activities, Ajman has also witnessed various dining options being introduced that include wildlife into its offering, such as at Al Zorah’s The Pavilion, where visitors can enjoy a dinner surrounded by pink flamingos among the preserved mangroves.

Surrounding much of the region’s natural gifts are the Hajar Mountains, where located nearby is the Masfout enclave – a 90-minute drive from Ajman City – and described as a nature lovers paradise. Masfout’s agricultural land, high altitude and cooler temperatures cultivate a natural paradise for walking, mountain biking,
picnics and wadi, or valley, exploration.

The area’s mangroves provide a habitat to an array of native plant life and animals, with leopards, gazelles and foxes having previously roamed here. Plans are being discussed to attract more visitors to Masfout’s natural surroundings, notably via the development of hotels and parks.

Similarly, the township of Manama has a quiet, suburban feel to it, especially when compared to the rest of Ajman. For this reason, Manama is usually a temporary escape from the hustle and bustle of the emirate’s corniche and city centre shopping areas.

Another area currently under development is Manama’s new Al Naseem Nature Reserve, which aims to showcase the region’s natural landscape and protect its endangered flora and fauna. Officially, the nature reserve has not opened to the public yet. However, when completed, it will feature a number of natural parks, a nursery for plants, and an education centre for students, biologists and other stakeholders.

Taking advantage of the country’s natural attractiveness, and the tourists this brings to the emirate, Ajman’s tourism development department, and its accommodation facilities, are focusing on new ways to attract even more nature lovers to enjoy its service portfolio.

“Our priority at the moment is the opening of our hotel – the 179-key Wyndham Garden Ajman Corniche – which is set to accommodate the growing demand for leisure and corporate travellers in Ajman, including nature lovers and adventure seekers,” commented Hamdani.

According to Rijhwani, a strategy for Radisson Blu Hotel, Ajman, during the coming years, is to make Ajman a niche tourism destination, develop archeological tourism sites and promote all nature and wildlife attractions and investment opportunities across the emirate.

Further illustrating its growing popularity, the emirate achieved impressive tourist growth rates during the first three quarters of 2017, reaching 393,000, with occupancy rates increasing by 8.5 percent on the same period year-on-year, taking the total to 74 percent.

According to Al Geziry, these results are a huge boost to Ajman’s overall tourism revenues, which amounted to more than AED312 million (USD 1,146 million).

Additionally, Ajman’s 2021 vision is mainly focussed on tourism as a strategic sector that is expected to contribute significantly to its economic development.

Within this vision, particular markets are being targeted to increase growth rates, particularly from the Middle East, Europe, Africa and Asia.

“The Arab market will always remain a core category for us but with new developments in the industry, such as the 30-day visas on arrival for Russians, we are capitalising on these opportunities,” explained Al Geziry. “We are also focussing on marketing strategies which, with the steady increase of numbers, is proving to be effective.”