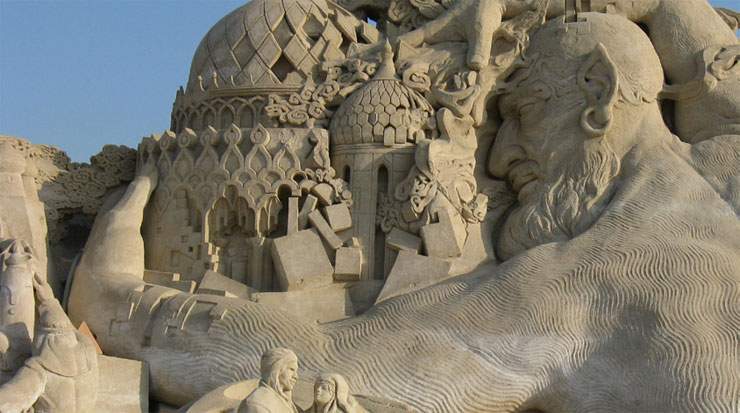 For visitors who seek an authentic experience or even are willing to expand their horizons to something new, Kuwait has the answer.

Its seafront location allows thrill-seekers to explore the Persian Gulf in all the ways possible.

“Travellers to Kuwait will enjoy exploring the diverse range of sea activities like diving, snorkelling and kayaking owing to the warm and shallow waters of Kuwait Bay,” said Jardin.

Most sea clubs in Kuwait offer a variety of facilities such as outdoor and indoor swimming pools, while each club allocates a particular day exclusively for women and children, such as Ras Al-Ardh.

To experience water in a more amusing way, there is a range of water sports available including windsurfing, boating, water-skiing and scuba diving, where their only requirement is to just rent or buy the equipment needed. Among these sports yachting is also available since Kuwait is considered to be the sailor’s paradise. Just like all the other sea clubs, the yacht club has an organised marina with about 300 fully serviced berths, where sailing activities are organised. The Kuwait Offshore Sailing Association makes the yachting experience more appealing by organising a number of races throughout the year.

Peter Schuler, general manager, Symphony Style Hotel Kuwait, said, “The Arabian Gulf is intrinsically linked in Kuwait’s heritage and culture and offers an array of experiences and activities for visitors, such as marine exhibitions, yacht excursions and exhibitions and trips to surrounding historical islands [...] Yacht exhibitions are extremely popular with businessmen from all around the region seeking to purchase a yacht.”

Like many of the Gulf countries, Kuwait is also famous for pearl diving. Annual pearl diving festivals are organised in order to help the new generation to experience the hardship and this specialised pearl diving. During the dive, the divers are secured to the railing of the ship with a rope tied around their waist, once they reach the surface; they tug on the rope, signalling the helpers to pull them back. The end of these festivals is celebrated by singing and dancing.

Even though Kuwait showcases a large range of business opportunities, it is one of the richest countries in terms of culture and heritage. Kuwaiti popular culture, in the form of theatre, radio, music, and television soap opera, flourishes and is even exported to neighbouring states, with a minimum of 15 television series produced annually. Kuwait is known for its home-grown tradition of theatre, having the oldest modern arts movement in the Arabian Peninsula and being the birthplace of various popular musical genres, such as sawt.

Kuwait International Trade Fair is hosted every January in Mishref and it is said to be the leading trade expo for household consumables and home supplies industry in the country. The fair allows exporters and importers of both local and global markets to promote their business including jewellery, cosmetics, perfumery and clothing.

Moreover, February 01 – 28, is considered to be Hala February which plays a vital role in promoting tourism in Kuwait. Visitors who arrive during the springtime can enjoy a plethora of festivals with cultural celebrations, annual parades, shopping carnivals and contests. During that period shoppers can gain huge discounts on their purchase and can also find special accommodation and airfare packages which are offered during the festival.

Schuler, highlighted, “Kuwait has an abundance of historical and cultural heritage to attract visitors. Its iconic landmarks include architectural highlights such as Kuwait Towers and Liberation Tower. Kuwait City’s Grand Mosque, which is the biggest in the country, is also a key tourist attraction and the fine museums and beautiful cornice are a big drawer. A bustling souq and modern shopping complexes provide visitors the perfect mix of old and new.”

Located in the heart of the city, the Grand Mosque is one of the most famous landmarks in the country. Official religious celebrations are held in this mosque only, and locals refer to it as Al-Masjid Al-Kabir. The mosque covers an area of 46,000 m2, while the building itself covers 20,000 m2. It is internationally known for its Islamic architecture and is open for visitors every week day and includes a free guided tour. The main prayer hall has four columns and it can house nearly 10,000 men.

A TASTE OF CULTURE

Kuwaiti cuisine is an infusion of Arabian, Persian, Indian, and Mediterranean cuisines. A prominent dish in Kuwaiti cuisine is machboos, a rice-based specialty usually prepared with basmati rice seasoned with spices, and chicken or mutton. Seafood is a very significant part of the Kuwaiti diet, especially fish. Local favourites are hamour which is typically served grilled, fried, or with biryani rice because of its texture and taste, Zbaidi, safi, and sobaity.

Jardin, concluded, “Travellers from the Middle East and beyond have increasingly started making decisions on destinations to visit based on the culinary experiences [...]. Kuwait’s buzzing scene of local markets and must-visit restaurants is driving a movement by entrepreneurs to make Kuwait City the World’s Food Capital by 2030, which in turn, is enticing foodies from far-and-wide to discover the country’s vibrant gastronomic culture.”