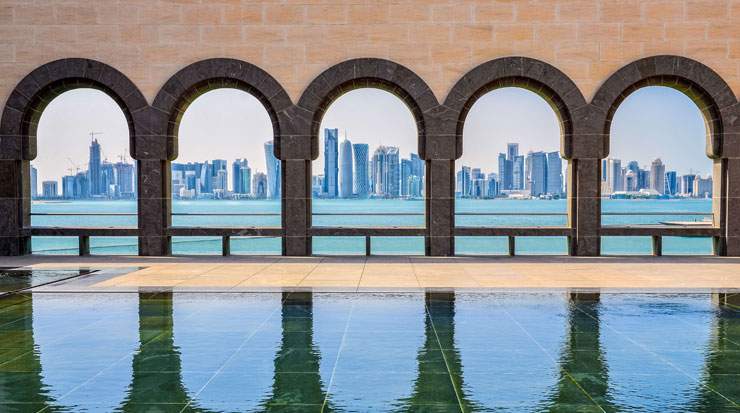 BOASTING AN IDEAL ALL-INCLUSIVE PORTFOLIO OF BUSINESS AND LEISURE, QATAR HAS BECOME A REGIONAL HUB FOR CONFERENCES AND EXHIBITIONS.

SEEKING TO TRIPLE THE NUMBER OF CORPORATE TOURISTS BY 2030, QATAR'S MICE SECTOR IS SET FOR SUCCESS WITH DEVELOPING EVENT MANAGEMENT SERVICES AND EMERGING MARKETS.

Qatar has been flagged as the most open country in the Middle East region gaining increasing popularity among untraditional visitors.

The direct contribution of travel and tourism to GDP in 2016 was QAR18.9 billion (USD5.2 billion), 3.4 percent of GDP. Specifically, business travel spending generated 42 percent of direct travel and tourism GDP in 2016, QAR28.8billion (USD 7.9 billion), expected to grow by 4.9 percent to QAR33.7billion (USD 9.3 billion) until 2027, according to the World Travel & Tourism Council's report Travel & Tourism Economic Impact 2017.

The country's ease of access, location, leisure, business and luxury options, in combination with the welcoming locals, has created a magnetic impression around the country's brand.

Despite the negative impact from neighbouring countries due to the on-going crisis in the region, Qatar's tourism was equally supported by other markets as Franzen pinpointed, "While aforementioned markets broke away, we saw a healthy growth from markets such as the US, the UK and Italy."

Benefitting from international visitors, Qatar is focusing on enhancing this expanding network by encouraging nationals from countries such as China, Turkey and Azerbaijan to visit.

Europe and the US were steady and we can see an increase in visitors from Australia, New Zealand and the Indian subcontinent," highlighting the countries change in market target. Similarly, Franzen supported the same potential markets through his views, "We see this as a new opportunity for new business in addition to other strong emerging markets such as Turkey, China, Russia and CIS countries." Adding, Kashif Javed Khan, director sales and marketing, Governors West Bay Suites and Residences, said, "Currently, we are aiming to target the China and Turkey markets […]."

The increasing numbers of European and American visitors directly reflect the impact of visa facilitation policies, as 24,000 visitors from the two regions are taking advantage of the free 96-hour transit visa to visit Qatar.